Clenbuterol is one of the most sought after metabolism boosters but is it safe and will it give you the head-turning leanness you’re striving for? MF investigates.

Diet and sweat all you like, but if you aren’t seeing the lean results you feel you deserve then you’ll probably find yourself peering down the rabbit hole of internet retailed fat burners. One that’s likely to raise its cyber-hand higher than all others is clenbuterol. With red carpet advocates that include Posh Spice, Britney Spears and Tour De France winner Alberto Contador, it has forged a cult-like following among many exercisers who swear by its calorie-culling prowess, but is it healthy to use and is it worth putting your credit card details at risk to get some?

First off, we are not advocating or recommending you use Clenbuterol. What follows is synopsis of its use for you enlightenment and entertainment. If you buy it or use it, what happens is on your head. Got it? Good. Clenbuterol is not approved for human use in Australia and is also banned under the Olympic Movement’s World Anti-Doping Code Prohibited Classes of Substances and Prohibited Methods. And a couple of years ago, a Perth man was charged for bringing back a small amount of Clenbuterol in a multi-vitamin container. But it’s legal in the USA and most of Asia and is freely available on the web with sites catering to Australia. OK, now that’s over…

Where it came from

Like just about everything that plays in the performance-enhancing sandbox, clenbuterol had its humble beginnings in the livestock game. It is registered in Australia as a muscle relaxant for use during a cow’s labour and for respiratory treatments in horses. For the most part, it is used by exercisers as a bronchodilator to increase the oxygen stores in working muscles with a net effect of creating leaner muscle mass. Worryingly, depending on where you live or buy your food from, you could be eating it unwittingly. A study in Drug Testing and Analysis found the illegal use of clenbuterol in livestock farming could impact the results of doping tests in sports. Fortunately, clenbuterol use is limited throughout most of the world but unscrupulous farmers could put athletes at risk of testing positive for this substance. 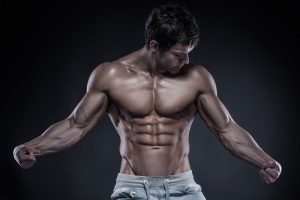 It is often sold under different labels, such as Dilaterol, Spiropent and Ventipulmin, but they all have the common goal of relaxing airway muscles to make breathing easier. Once you’ve swallowed a dose it binds to your epinephrine receptors then interact with your sympathetic nervous system to mimic the fight-or-flight response, similar to an adrenaline spike. This sends your body into a state of heightened sensitivity that increases thermogenesis and metabolism. Some users suggest it can even improve muscle protein synthesis, though much of the serious research disputes this. That hasn’t stopped it from racking up a reputation for both increasing aerobic capacity and building muscle.

Will it make you an MVP?

When it comes to on-pitch performance, the bro-science says ‘hell- yeah dude’ but the hard science suggests otherwise. A paper in the Annals of Pharmacotherapy states very clearly that it does not give athletes an unfair advantage. Ironically, it has still received the big no-no for any athlete looking to compete for gold under the International Olympic Committee or any sport complying with the World Anti-Doping Agency. So, while the scientists suggest those improvements are little more than a placebo, other sporting bodies disagree. This means clenbuterol occupies a grey area legally, as it is definitely illegal to distribute it, however the lines are blurred about whether or not you’re allowed to use it. If you pay attention to the example of the AFL’s Collingwood players, Thomas and Lachlan Keeffe, you’ll note the pair was suspended in 2015 for using it. This means it’s a safe bet that you’ll sit yourself in hot water by partaking, especially if playing at a high level, making you a MVP to the bench, not the scoreboard.

How you’re supposed to use it

It has a very short half-life in your system, which has led to the creation of usage cycles used to avoid your body building up a tolerance to it. These cycles usually last 4-6 weeks and vary in structure. Some lifters like to take it every day for two weeks then take nothing for two weeks, while others like to adopt the two-days-on-two-days-off approach. The research isn’t clear which tactics will best serve your interests, but trial and error or total avoidance of it are the safest bets. If you’re looking to gain lean muscle then some lifters also pair it with a creatine cycle that is rumoured to give you that large and lean look.

If you’re taking it then you’re no doubt chasing the good stuff like leaner abs but there are some other nasty little niggles that you may experience. While these can be similar to those you’d experience from legal fat burners, many of the clenbuterol reactions can be severe so don’t dive into a cycle without considering your overall health. You can expect to feel at least a few of the following side effects:

Have a short term dabble with this fat burner is probably not going to have any life changing effects, but use it over the long term and you could regret it, especially if you value your ticker. A paper in the Journal of Emergency Medicine found bodybuilders who had taken large doses of clenbuterol also suffered acute myocardial ischemia. This happened when the blood flow to their hearts was reduced enough to prevent it from receiving sufficient oxygen, leading to long-term damage to this organ which could trigger a heart attack. That said, these were in people who took horse-sized doses of this supplement, so it’s tough to tell what systematic doses over a long term will do to your heart. Either way, you don’t eat hay so don’t treat yourself like a horse.

Without a lot of concrete research to support it, users say that it can increase your metabolism by as little as 10%, though some say more. That’s about as much as adding an extra 15-minute interval training run to your workout routine. There’s no question it will indeed make you leaner, but it could be worse for you than other fat burners. The smart bet is to get a medical check-up before you take it then get regular check-ups while you are on it, to make sure you’re doing okay. There are a lot of unknowns regarding it, it all boils down to whether you’re willing to risk it with the devil you know – your overweight stomach – or the devil you don’t – clenbuterol. The easy way to run hard