Growth hormone is the hashtag hogging the supplement limelight but its high-tech cousin GHRP-6 might offer fewer negative side-effects and significantly more rewards.

The topic of Growth hormone (GH) can leave you wondering: is it a good, or a really bad thing? Look into the cold science of it and you’re left with a sweet and sour aftertaste of indecision from weighing up the risk-reward ratios with each cyberspace headline swaying the balance of power like a tabloid romance. Why the fascination? Well, over the years growth hormone (GH) has garnered celebrity status, not just in the world of exercise, but on the crimson rug too, since becoming a must-have for Hollywood A-listers who need to look their best. Taking it regularly gives you a more youthful appearance, serves up more energy, burns fat and improves muscle tone. The $10,000+ per year price tag does nothing to harm its appeal with the elite either. However, a more affordable and potentially no-less effective substitute, in the form of growth hormone releasing peptide-6 (GHRP6), is offering the injectable fountain of youth option to the man on the street. Seeing the word peptide in its name, means its made up of 28 tiny amino acids – the building blocks of a complete protein – that acts like a self-inflicted punch to the kidneys to your natural supplies of this powerful health elixir. Yes, it does reside in a legal grey area, and we certainly don’t condone its use or suggest you use it. Instead, this article is about giving you scientifically sound information on the latest developments in supplements. So, caveats aside, keep reading to learn about this provocative supplement.

Regular GH used to be manufactured from cadavers, a grim prospect indeed, but it’s latterly become synthesised in a lab, making it a little safer because the human derived version risked causing Creutzfeldt-Jakob disease – a degenerative neurological disorder that almost always proved tombstone-worthy. The first synthetic version was a direct substitute for the GH that your body manufactures, so over-zealous muscle-hungry punters risked overloading their body with too much, leading to the tell-tale side effects like a Desperate Dan jaw, nerve pain and even increased tumour growths. This is where GHRP6 earns its keep because it tells your pituitary gland to begin secreting more natural GH. You get a solid pulse in your own natural GH levels, as well as an increase in insulin growth like factor 1 (IGF-1) secreted by your liver. IGF-1 helps your body metabolise more protein so your entire body becomes more anabolic from its own supplies, not synthetic versions.

Bottom line, more growth hormone in your system, regardless of where it came from, dramatically improves the way your entire body looks at the beach. It used to be used to treat dwarfism, but in 1990 researchers wondered what would happen in normal guys which spawned a study in The New England Journal of Medicine which found when men over 60 years old took GH for six months they gained on average 8.8% lean body mass and lost 14% fat mass – predominately around the waist – increased their skin thickness (your skin is thicker and more elastic when you’re young), increased their bone density by 1.4% and felt a greater sense of well-being. Not a bad effort, but more GH in your system, courtesy of GHRP6, also impacts your appetite in the fiercest way possible. Roughly 20-30 minutes after injecting it you’ll get an intense surge in the desire to dent the contents of your fridge. That’s because GHRP-6 riles up the peptide ghrelin, which tells your stomach to empty its contents and signal man-sized hunger burst. If you’re taking high doses, the growling bear inside your gut can cause you to feast uncontrollably; great if you’re trying to add muscle, less than ideal if you’re trying to strip fat. To skirt around this, timing can be crucial, with many users taking a dose directly after a workout. This allows them to slam their post workout protein shake then a short while later, lock into a feast of epic proportions that’ll trigger muscle growth. If you’re trying to lose fat, the simple fix is to lower your dose slightly, the site ResearchPeptides.com recommends limiting your intake to no more than 150 micrograms. So if you going to use it then supplement smart and tailor your doses to your goals. 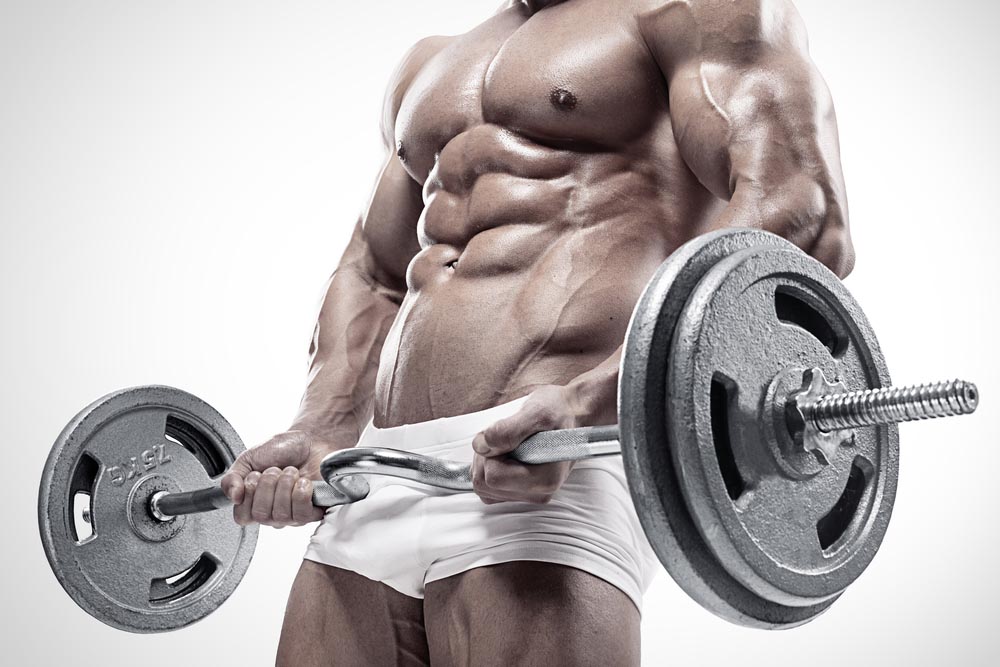 THE BEST NIGHT OF YOUR LIFE

The key to your exercise recovery rests firmly on how well you behave between the sheets. No, not like that, sleep is a time when your muscles repair and a big catalyst for this is the recovery power lies in your hormones, namely GH. Research in the journal Neuroendocrinology found GHRP6 supplementation improves the quality, but not duration, of your sleep. And better sleep is a formidable gladiator in your armoury if you want to make your muscles more maximus, plus it can improve your ability to heal from injury, but it’s not all gravy. Some users do report feeling painfully ravenous, preventing them from getting quality kip. If this is the case then have a big feast after a dose, then hit the hay. Good cop for anyone looking to build, bad cop for anyone looking to lean up.

STAYING IN THE GAME

GH’s big USP is its ability to overcome injuries thanks to its restorative properties. Sadly, this notion is still in the firmly in the journal of bro-science. Research in the Clinical Science found when pigs were injected daily with GHRP-6 it had powerful antioxidant effects that could reduce internal heart attack damage. Your DNA isn’t bacon, but it does offer the telltale signs of a potential healing agent and many lifters do report success with restoring long-term overuse injuries, such as tendinitis or rotator cuff niggles. So while beefed up singlet-wearers have sung its praise, the labcoat-wearers haven’t confirmed its scientific efficacy just yet. So watch this space for the new GHRP-6 science that could keep your physique in the sweat game.

You’re no doubt taking it for the fairy tale positive side effects, which have already been outlined, but like any caper about something enchanted, the magic comes with a price. For GHRP6 these can include flu-like symptoms, joint aches, headaches and water retention. Prolonged use can give you a tingling feeling in your skin than can also lead to a loss of sensitivity to touch. Yeah, you don’t want it down there. Fortunately, this is often in rare cases and when you consider even garden-variety paracetamol can dish out hives, diarrhoea and nausea then by comparison these aren’t huge risk factors. The biggest drawback is that it has a meagre half-life of 15-60 minutes, which means you have to take it daily for it to be effective, with the primary method of administration being a big ole fat needle. So the idea of turning the glutes into something that resembles nanna’s pincushion may deter pretty much all-conscientious pain objectors.

HOW MUCH GHRP-6 TO TAKE?

Everybody has unique goals and these are best adjusted by your dosages. Research in The Journal Of Clinical Endocrinology & Metabolism found 100mcg will saturate all your receptors, but taking 200mcg will cough up an additional 50% of effectiveness, where as 300mcg delivers just a 25% of an additional boost. So the law of diminishing returns is firmly in place with this peptide. What’s more, higher doses were found in a study in The Journal Of Clinical Endocrinology & Metabolism to increase people’s stress hormone, cortisol in doses over a 100mcg so if you do decide to delve into this supplement, stick to the lower doses.

There’s no question this is a slightly safer version than GH, but it’s got plenty of athletes in hot H2O for testing the waters. Famously, this is the peptide the Essendon footballers were caught out using which led to the government shutting down regulatory loopholes used to legally get it into Australia. So assess all your risks before you take it then be honest with a doctor if you are considering it, particularly if you want to heal an injury, because your health is far more valuable than any improvements to your reflection.

The MF Guide To Fat-Loss

Androstenedione: Does it Work?

10 ways to lose your gut, according to science